Be the first to review this product
As low as $146.95
In stock
SKU
05-0151-0PParent
Add to Wish List Add to Compare
Skip to the end of the images gallery 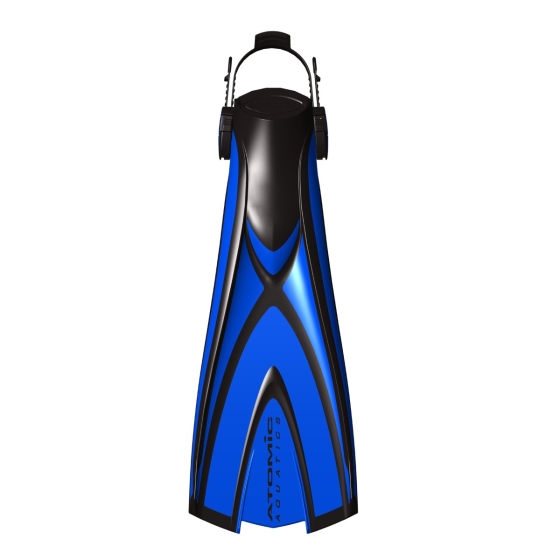 Skip to the beginning of the images gallery
Details

1. Rigid Low-Profile Side Rails and Shorter, Stiffer Blade
Makes turning and pivoting easier. Most fins have taller side rails for tracking and bending strength. The Atomic X1 BladeFin has lower profile rails with less side-to-side resistance that allow you to rotate, spin and turn more efficiently during alternate fin kicks.

2. Monocoque Structure and Power Plate
Unique structural engineering design is connected to the low-profile rails, efficiently transferring power from the leg and foot to the rails.

3. Asymmetrical Blade Bend Flexing
This design attribute is perfect for alternate kicking styles. Scissor kicks, frog-kicking and helicopter turning in tight circles put more emphasis on the up-kick or return stroke. For these kick styles, the X1 provides more feel and control of the fin to maneuver more effectively without folding under heavy load.

The X1 BladeFin has the backbone to control and maneuver in tight spaces, perfect for alternate kicking styles such as helicopter, scissors, backwards, flutter and frog-kicks. Another design attribute of the X1 BladeFin that contributes to improved alternate kicking styles is asymmetrical blade bend flexing which provides more feel and control of the fin to maneuver more effectively without folding.

Easily snap the buckle on and off. And be confident that it will not release accidentally. Buckles rotate 180 degrees and straps adjust with a simple pull. Standard on all X1 BladeFins.

The X1 BladeFin foot pocket design is taller with low-friction entry sections inside the pocket, perfect for large boots and drysuit boots.

Atomic Aquatics fins are warranted against defects for a period of one year. Keep out of direct sunlight when possible to avoid color fading. Store your fins with the foot pocket inserts in place and in a manner that prevents deforming.

*X1 BladeFins have taller foot pockets
More Information
Reviews
Write Your Own Review
Only registered users can write reviews. Please Sign in or create an account